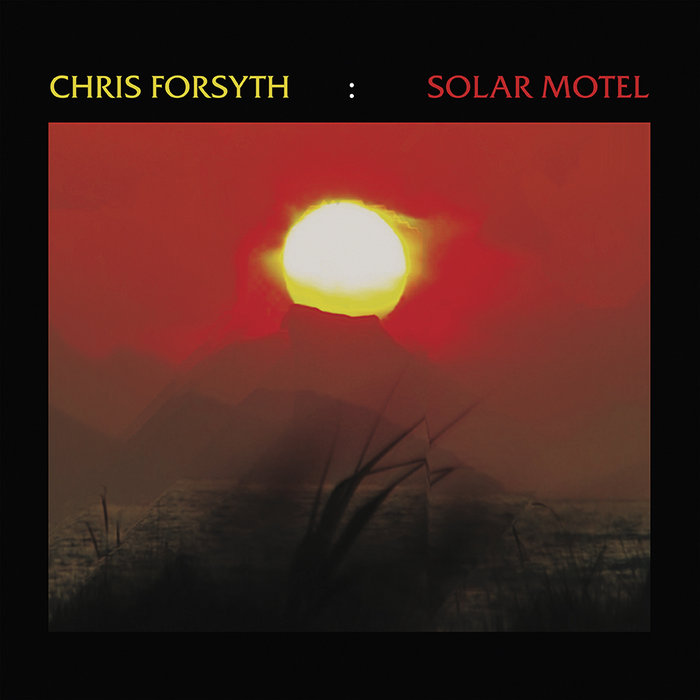 "Solar Motel" was originally released in 2013 by Paradise of Bachelors, and it is Chris Forsyth's first record with a true rock band format of guitar, bass, keys, and drums. It is also the record that brought Forsyth to the attention of connoisseurs of guitar anti-heroics like yourself (if you're reading this, you must be one). The LP version is long out of print, but the DL (and a few CDs) survive.

"Next level… Betrays an innate grasp of the serpentine structures and elevated duels that were integral to Television’s appeal. “Solar Motel Part II” emerges out of a raga and a bit of downtown firefight into the sort of face-off you imagine Verlaine and Lloyd – at least secretly – would be proud of. Heavy, throbbing hints of Glenn Branca underpin the jams, and the slide section being matched to a piano break conjures up a further relationship with The Allman Brothers. “Solar Motel Part IV” comes on like a particularly gnarly take on “Dark Star”, or one of those Dead-derived Sonic Youth epics like “Hits Of Sunshine”. Can’t recommend this enough, as you might have divined by now. I’m struggling to think of a live band I’d like to see more right now.

Heavy psychedelic stuff. It’s a robust album, prone to multiple minutes of knotted guitars, stumbling over each other to disorienting effect. It’s close to transcendent.

Escalating in sequence with head-swelling psychedelic bliss while showcasing Forsyth’s equal admiration for the guitar interplay of both Verlaine & Lloyd from Television & Garcia & Weir of the Grateful Dead. It serves as a perfect example for what Forsyth calls his music: Cosmic Americana.

Each tune builds to meticulously wrought, transcendent climaxes that bring to mind Tom Verlaine’s solo albums (or at least the good parts.) In concert, this music explodes with the same sort of explosive, self-righting chaos that you can find on Television’s bootlegs. [The album’s] precisely arranged layers of keyboards and guitars have as many behind-the-door delights as an advent calendar.

A gravity-defying, multi-headed, electric guitar-worshipping hydra. The alchemy between these players cannot be overstated.

An erudite and farsighted guitar stylist, mapping a path that’s hip and scholarly in equal measure.