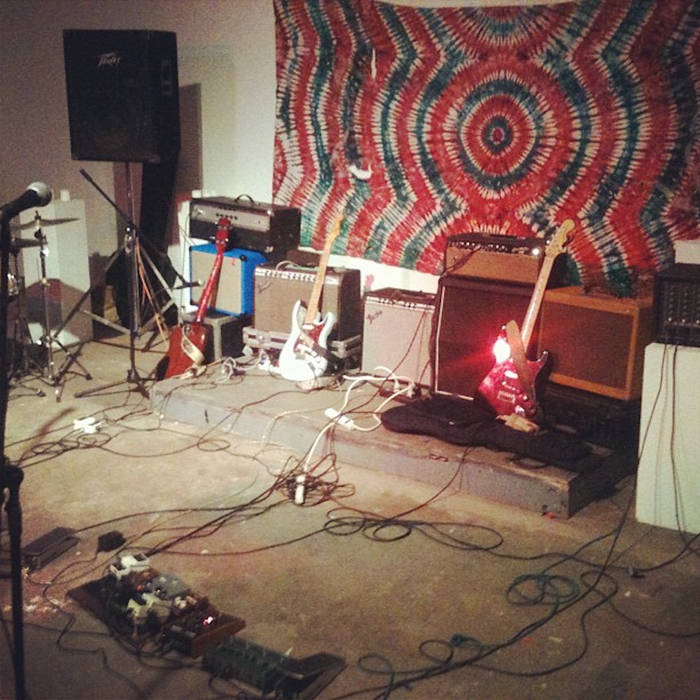 Vince Pettit This makes me miss live music so much!

It's a Chris Forsyth live record, of course I bought it.

The Solar Motel Band was formed in early 2013 to support the impending release of Chris Forsyth's "Solar Motel” album on the Paradise of Bachelors label in November of that year.

However, with Forsyth having relocated from NYC to Philadelphia in 2009 and the studio band members being in NYC and Kansas City, regular rehearsals seemed impractical with the studio band. So Forsyth, after years of solo and ad hoc improvised (and otherwise) collaborations, went in search of players for an actual band.

He found two of them - guitarist Paul Sukeena, then of local deep thud merchants Spacin' and drummer Steven Urgo, who most recently had been a touring member of the pre-fame The War on Drugs - living as housemates two blocks away from him. Bassist Kerlin elected to stay on and make the commute from Brooklyn.

In June, they brought some two-sets per night improvisatory flair to a weekly residency at Philly jazz bar Ortlieb's, and played scattered other local gigs.

One of those gigs took place September 13, 2013 at the DIY collective art/performance gallery Little Berlin, in the Viking Mill, a former textile factory at the end of Forsyth's block in Kensington, an area that was once known as The Workshop of the World for its density of factories and mills, but that, like most of North Philly, had fallen on harder times, victimized by of decades of deindustrialization, redlining, racism, neglect, poverty, and, well, the *actual* War on Drugs.

This recording, by local taper Sebastien Petsu, is a good sounding AUD and captures the boomy sound and energy of the high ceilinged warehouse room. It’s also very much a document of another time and place, both for the players and the neighborhood.

Since then, Forsyth has released a series of consistently acclaimed studio and live recordings, carving out his own little guitar- and improvisation-centric niche in the post-jam universe. Sukeena and Urgo each moved to the West Coast, with Paul working as a touring guitarist for Steve Gunn and Angel Olson and Urgo making solo music as Out to Sea and playing with The Dollar Band. Kerlin is the bass anchor of NYC's Sunwatchers, release music under his own name, collaborates with John Dwyer and others, and remains the longest-running member of Forsyth's bands..

It's also worth noting the other performers on the bill that night: Steve Gunn has risen through the ranks of hard-touring folk tinged songwriters and Cian Nugent has released a number of excellent records showcasing his own guitar and songwriting chops.

Kensington itself continues to undergo a long and bumpy bout of gentrification, and is presently an odd nexus where the opioid epidemic and fine dining meet, with the mostly working class residents with 20th century roots and the artists who moved in in the '00’s now being joined by a more affluent demographic, and many of the mills and factories and vacant lots more likely to be condos than DIY art spaces (Forsyth’s storefront spot Jerrys being a notable exception).

There’s a pull, an energy, in these performances that marks this recording as a time capsule of a different era, when psychedelic warriors staged events in unheated spaces and booking agents and guaranteed fees at corporate venues were a figment of the imagination. At this show, as with the neighborhood itself, the rough edges of this music had not yet been sanded down and refined, and while neither better nor worse, that’s a cool thing to revisit.