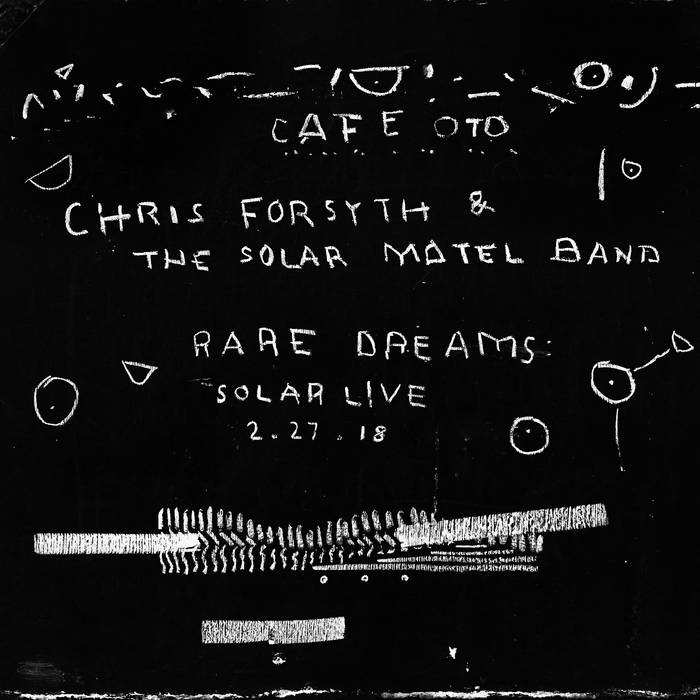 midoyle61 I discovered Chris Forsyth just by listening to him here on bandcamp. "Dreaming in the Non-Dream" is one of those aural concoctions that hits on all cylinders and keeps going. This album smokes. Favorite track: Dreaming in The Non-Dream (Live @ Cafe OTO).

Admo Chris Forsyth and the rhythm section of the almighty Sunwatchers form an unholy power trio to absolutely scorch through a set of extended jams and Neil Young covers. Favorite track: Dreaming in The Non-Dream (Live @ Cafe OTO).

On February 27, 2018, Chris Forsyth & The Solar Motel Band (comprised, in this iteration, of long-time SMB bassist Peter Kerlin and Kerlin’s Sunwatchers battery mate Jason Robira on drums) were close to wrapping up an 18-date tour of the EU and UK with a two-set, one hour and 45 minute show at Cafe OTO, London’s premier venue for adventurous music. Highlights of that show are included in this live release, RARE DREAMS: SOLAR LIVE 2.27.18, recorded before a packed house seated mere feet from the band’s amplifiers. These recordings reveal a band that is clearly in high spirits and high gear, operating with an expansive, improvisatory fleetness that allows them to stretch the material to almost ludicrous extremes and then let it to snap back to some semblance of form while somehow seemingly never wasting a note, a beat, a gesture. The four tracks included here comprise material culled from (at the time) the two most recent Solar Motel Band records DREAMING IN THE NON-DREAM (No Quarter, 2017) and THE RARITY OF EXPERIENCE (No Quarter, 2016) plus covers of two Neil Young songs - the autobiographical plaint “Don’t Be Denied,” lyrically relocated by Forsyth from Young's Canada and Hollywood to the more personally relevant geography of New Jersey and Philadelphia, and encore “Barstool Blues” (they’d run out of material to play, so another Neil Young tune it was). While the covers establish Forsyth’s basis, serving as an homage to Young and the quest for self-realization, the long tracks’ jams showcase the trance-inducing power of the Solar Motel Band as a performing entity. Kerlin’s gymnastically propulsive bass playing locks in with Robira’s relentless thud, each serving as counterpoint to some of the most blistering guitar work of Forsyth’s career. The telepathically dynamic interplay of the trio explodes with whiplash intensity across the 15-plus minute takes of “Dreaming In The Non-Dream” and “The First 10 Minutes of Cocksucker Blues,” each song’s structure serving as a framework for extended lava flows of energy. At one point late in the “Dreaming” jam, Forsyth unplugs the jack from his guitar, dragging it across the strings and lashing the body of his single-pickup “parts" Esquire, producing a desiccated barrage of percussive static. This is music beyond the notes; it is an expression of pure electric ecstasy, a simultaneous negation and celebration of rock music’s (indeed all musics’) essential energy. In contrast to the expansive but meticulously detailed guitar arrangements of his recordings, here Forsyth’s unhinged live guitar sound positively roars with a barely restrained vocal intensity, from liquid melodic lines to gnarled blasts of free jazz scree, to pulsating lead/rhythm vamping. I’ve had the pleasure of witnessing this band up close for a number of years now and I can authoritatively attest that while every show is different, when the SMB is running down a steep hill at full speed (as on these takes), they become a single leaderless vibrating sonic tornado, possibly beyond the control and logic of the players themselves, picking up listeners along the way and taking them along for the ride straight into a solar furnace of sound.
- Jerome Onfront, Philadelphia

Without whom: Maria, Lee, Mike Quinn, Kevin Monty, John Allen, Ricky at Swamp Booking, and everyone at Cafe OTO